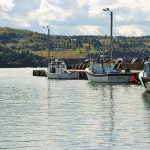 Located along the north coast of Eastern Nova Scotia, Arisaig is a small picturesque fishing village named by early residents after their home on the west coast of Scotland.

Popular as a photo and picnic stop along the Sunrise Trail because of its pretty lighthouse, colourful fishing boats moored at the government wharf, and its significant fossil deposits in Arisaig Park.